Eggplant Parmesan with a side of Swoopy Bangs

June 18th was a big day.  Not only did I finish another book, but I tasted a new food.  And checked off an item that wasn’t even on my list, but in retrospect probably should have been.

Hubs and I made a last-minute trip to South Carolina on Sunday to see his family and while we were there, we cashed in a gift card to Travinia Italian Kitchen we’d received as a Christmas present.  The food was amazing, and I decided to seize the day and order Eggplant Parmesan. 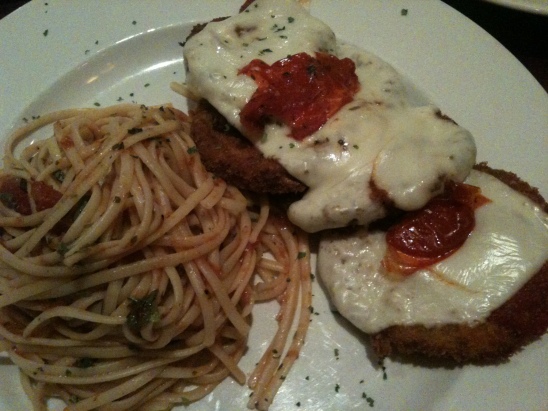 Why was this a big deal?  Because I’ve never tasted eggplant before.  And because I don’t really like red sauces.  As you can see in the photo above, I did ask them to go light on the sauce, but the fact that I even asked them to “go light” instead of “no sauce on the plate anywhere, please” was a big deal in and of itself.  And then add in the eggplant….well, miracles do happen… I loved it.  The breaded eggplant actually reminded me of the consistency  of fried green tomatoes, which happen to be a favorite of mine.  I would absolutely order this dish again, and can’t wait to try eggplant served other ways like grilled or sautéed.  yummy yummy.  And of course, I love putting another check-mark next to

bringing the grand total of check-marks up to six!!!  For a girl who is a super-picky eater, this is a major accomplishment.  And eating eggplant wasn’t the only adventure I had that day…

I’ve wanted bangs for a while now, but I’ve just never had the guts to pull the trigger.  Husband has also voiced on occasion that he likes my hair as it is….so I figured why change?  But today…..something got the best of me…maybe it’s this whole turning 30 thing that’s made me willing to step out and try things I never would have tried before…but I walked into a hair salon I’ve never been to before, in a town I don’t live in, and had a girl I’ve never met before cut long swoopy bangs into my hair.  And I LOVE them.

It wasn’t as entirely random as it may seem.  Just that morning, I’d looked in the mirror and commented aloud that it was time for a trim; something a little less……Pentecostal. My husband has a good friend who lives in Columbia and is a stylist so I pulled up her Facebook page and saw that she works at Cline’s Salon Vista.  A quick iPhone Google search later, I called the salon and although Kristin wasn’t available, another stylist, Kelsey, was.  Both girls have gotten glowing reviews on Yelp and other business-review sites so I figured I’d go for it.  Fortunately, Kelsey was as knowledgeable as she was nice (and her own haircut was adorable!) so I felt totally comfortable entrusting my head to her hands…and scissors.  The end product wasn’t near as dramatic as I’m making it out to be, but its perfect for me. Just a tad funky, good for my hair health to be freshly cut and trimmed, but still totally “me.”  So I guess I could say I get to cross off: