A few weeks ago, Mary Hall graciously took us on a tour of this year’s Johnson family garden.  And it got me thinking that I should follow suit.  Now before you get all excited, lets review that I don’t have a large garden.  In fact, I just have a few things growing here and there, but what I’ve got is strategic so I just had to share.

First off, we have an herb box on our back porch willed with lavender, rosemary and cilantro.  Everything grew gangbusters this year thanks to some stakes and netting I added over it.  Last year, the chickens decided that the herb box was the perfect size for them to hop in and take a dirt bath so our herbs didn’t make it very far.  Although the netting is only loosely draped over the top, it’s been enough to deter my feathered friends from trying to get cozy so I’ll probably continue this practice in years to come.

Next is a new addition to the yard….two blueberry bushes.  If you remember from years past, Keith and I both really love picking blueberries (see here and here for more blueberry adventures, or here and here for some yummy blueberry recipes) so it really only made sense for us to add our own bushes.  Louisa the chicken has developed a penchant for jumping up to grab the ripe berries off the top so we may not end up getting very many until the bushes get bigger.  But I’m glad to have them in our yard nonetheless…and have enjoyed the few tasty berries I’ve already been able to pick from them. 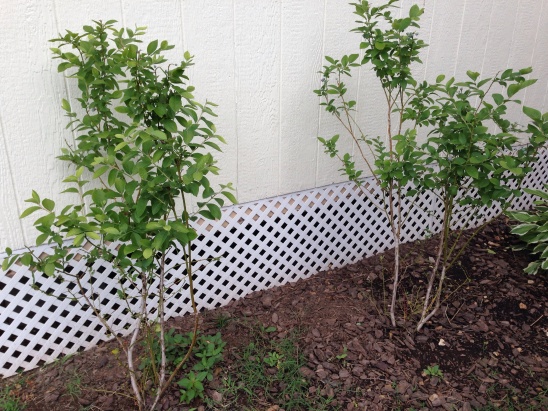 Our two blueberry bushes. Tasty fruit and nice addition to our landscaping. 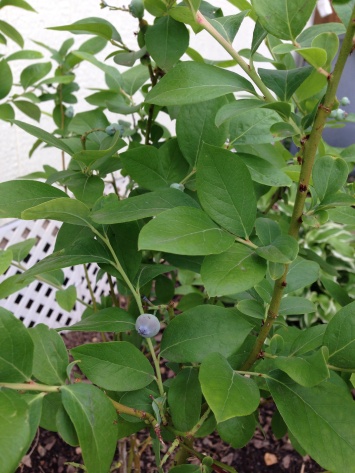 Berries! Wonder how long before Louisa the chow-hen figures out they are there?

Last on the list of growing our own food this year is the actual garden portion of our “garden coop.”  Last year I decided to bring some shade into the coop by growing pole bean plants and cherry tomatoes up the side of the coop.  (You can see the start of that project here, although I apparently neglected to post update photos.)  The beans were wildly successful and the tomatoes were as well so I reprised the project this year and planted from seed long before the last freeze not knowing that you’re supposed to start seeds inside and that beans and tomatoes both have a planting season.  I don’t know if it’s all that fertile soil from the chicken poop, or just dumb luck or a combination of both, but my little seeds are growing like champs, climbing the coop wall like a trellis and already bringing shade to our hens.  The bean plants are full of blooms and I have several baby tomatoes on my tomato vines.  I put some bird netting around this garden too to keep the chickens from digging up my plants and so far it’s been successful.

Edible shade….green beans and tomatoes growing on our chicken coop! We should have our first harvest in a few weeks!

Look at how huge those tomatoes and bean plants are! No stakes needed….they hold themselves up to the side of the coop.

And on the non-edibles front, we did a few hanging baskets and such, but the most notable victory has been our daffodils.  Aren’t they lovely? 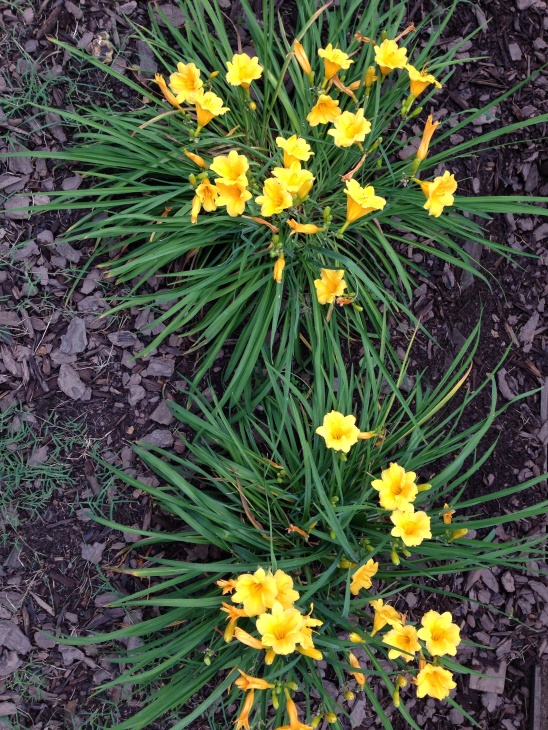 So there you have it.  Not as fancy as the all-out farm that Mary-Hall has cranking at her place, but always exciting to grow your own food.