Whelp here is one whopper of a #latergram.  I meant to post these costumes last October but ended up working on the baby’s until you know, midnight on 10/30.  Then I intended to post as a May the 4th celebration.  And now here we are, a full year later.

But hey, Star Wars mania is in full force, and these are two kid costumes you can literally turn out at the last second if you ha.

My older son was dead set on Darth Vader for weeks ahead of time so I was prepared for that one.

What you need for Preschool Darth Vader:

The cape is velcro’d on at the shoulders so it can come off if needed.  The felt decor and belt were just pinned in place then slowly sewed right around the edges with my sewing machine.  Boom.  Most impressive. (That is a Darth Vader quote, Bethany.) 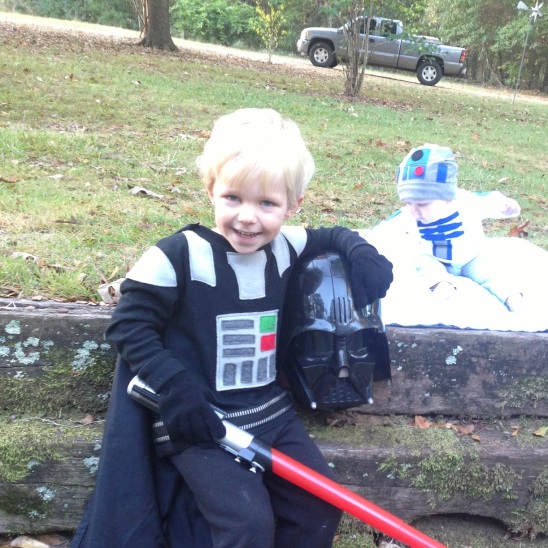 For poor Davis, we had decided to stick with the villain theme and make him a Jabba the Hutt tail to wear.  At that point in his life, Davis and Jabba sort of had similar body types. You know, the “rolls on top of rolls” look.  (I miss those rolls!!)  But then it was turning chilly and the Jabba tail just wasn’t coming together well.

And I ran across a picture of an R2D2 onesie on pinterest on approximately 10/29 that was just too cute. 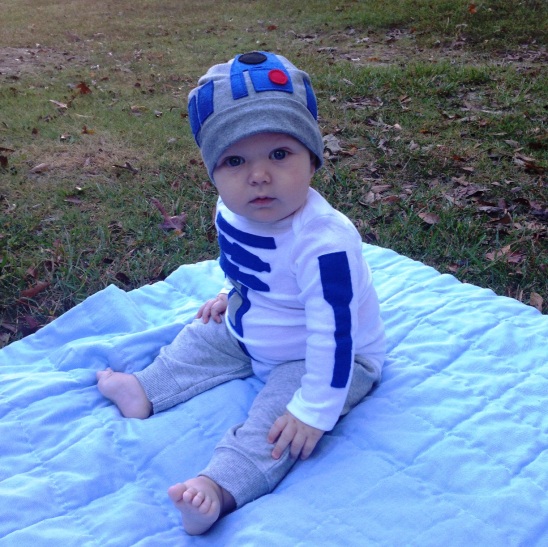 So for this Baby R2-D2 costume you will need:

Decorating the onesie is easy: cut out the felt, pin it in place, and then sew around the edges with coordinating thread on the sewing machine.  I had to sew the pieces on the arms by hand because the sleeve of the onesie was too tiny to fit my sewing machine. The sewing by-hand is a little tedious, but with the machine its shockingly easy.

Now about the hat… I searched the tri-county area for a gray infant cap but alas the ONLY available colors are pink, blue, and yellow. After panicking a bit, the fog cleared and I realized that such a thing could be made from scratch.  Here is the tutorial and pattern I used, although I upsized it by about half an inch to fit a 6-month old (sniff sniff). The hat probably took an hour to figure out, and as any DIYer knows, an hour is practically nothing at all. I believe the entire R2D2 outfit took from about 9pm-midnight on Halloween Eve with at least 2 scrapped hats along the way.

And that’s what we did in 2014.  I’ll be back in a year to show you what I’m sewing this week. (more capes, duh!) Happy Halloween and may the force be with your sewing machine between now and then!

Sometimes you just need a project.  You know, to keep yourself from trolling Craigslist for furniture that could potentially work for a house that you could potentially buy in a couple of months.. if you know what I mean.  And/or stressing over said house and all the little roller coaster rides that accompany the process.  Let’s just say – rural house buying with just a little acreage ain’t the faint of heart.  So many emails.  So many phone calls. “I have no idea what fire protection zone its in, should I?” Ugh.

This project started with an impromptu trip to the thrift store and ended up as a custom paint-by-number-ish bluebird painting.

I took some inspiration from this paint-by-number mural. (Super cool for a kids room right?)  I love that vintage look and thought it would be easy to duplicate with a little help from photoshop.  And, its a pretty simple process that can be easily duplicated by anyone with some time on their hands.  To make it even more awesome, you could use a photo that you actually took, or one of a meaningful place, etc.  Pet portrait?

Ok, I’m putting a break in so I don’t consume the entire front page of the blog. Click through to see what I did, step by step with tons of pictures. Yay!

END_OF_DOCUMENT_TOKEN_TO_BE_REPLACED

Our sponsored child’s birthday is coming up on Saturday, the same day as Ransom’s.  So, last month I was working on a birthday letter online and poking around the Compassion website.  I ran across some great information that I thought I should highlight here, in case any other Compassion sponsors are reading this.

If you’ve never heard of Compassion, its a ministry that Bethany and I both strongly support.  Their tagline is “Releasing children from poverty in Jesus’ name” and that pretty much sums it up. My husband and I sponsor a young girl – Alba in El Salvador.  Bethany & Keith sponsor several kids from all over the world.  You can read our previous Compassion posts here.

So, here are some links to the information that I found so helpful: Letter Writing FAQ! Also, this blog post.

I knew there had to be some delay between our letter writing and Alba receiving them, because the letters have to make several stops, be translated, etc.  However, according to the blog post it can take up to 3 months.  Of course, now I was feeling like a slacker for only writing Alba about her birthday six weeks in advance.  *Mental note to send a Christmas card SOON.*  BUT, then today I got a response from Alba that mentioned our last letter… so, I guess the delay between here and El Salvador is not as long as some countries.  Hooray!

All that aside, I was inspired by this List of Small Gifts that you can include with your letters. We’ve done stickers and photographs before but “Paper Dolls” just jumped off the page at me. (Side note: check this!! A Pinterest board of more ideas.. super cute. My fav may be the DIY scratch-offs.)  Blame it on my misplaced interest in all things miniature.

I found some doll templates here. I printed these on leftover birthday invitation card stock and rounded up four random sheets of scrapbook paper.

Now, Alba seems like a very sensible young girl, and she wants to be a doctor when she grows up. (At least she did.. These things change you know.) So here are her first shipment of paper dolls, complete with a lab-coat sporting Dr outfit.

It occurred to me that her doctors may or may not wear white coats.  I decided not to worry about it.  That outfit could just as easily be a white blazer with a weird necklace.. either way.  And now its occurring to me that lab coats have long sleeves.. Oh well.

This morning I tackled one of the list items I’ve been most afraid of….learning to use the circular saw.  Why did that scare me so much?  Probably because I’m a wimp.  And circular saws are loud and I tend to be a worst-case-scenario person who imagines accidentally slicing off one of the fingers I so very much value as a violinist.  But this morning I bit the bullet and unearthed the saw from it’s place in the shed and gave it a whirl (I think I’ve used that joke before….but it’s so good I couldn’t resist using it again).  Why the sudden interest in sawing?  (besides the desire to check 4. Learn to use a circular saw off my list?)  Necessity.  That saw was the only thing that stood between me and a completed DIY project…… END_OF_DOCUMENT_TOKEN_TO_BE_REPLACED 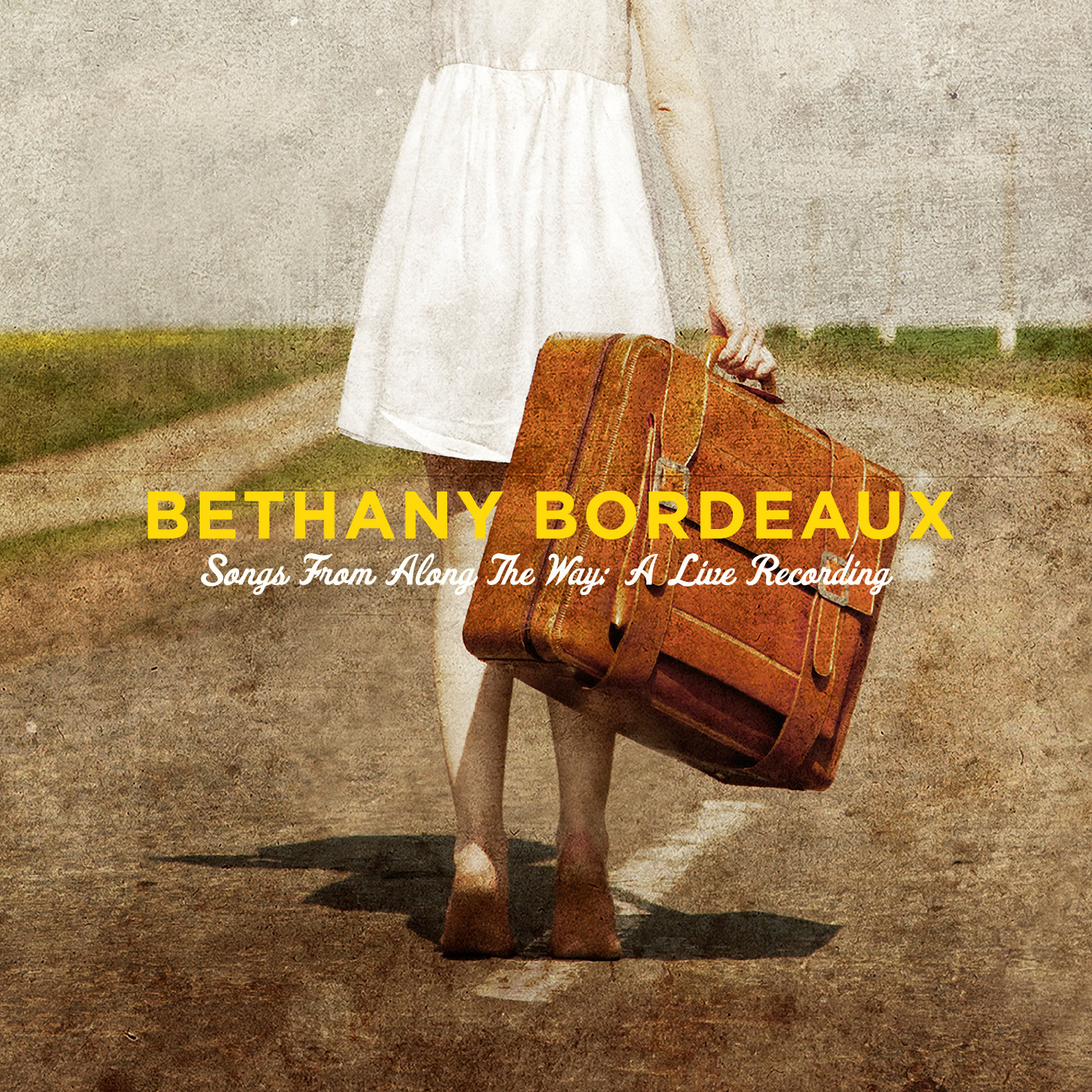